An important first step in getting your garden ready for spring is to sanitize your seed trays. Read on for the simplest method of disinfecting your seed starting equipment to ensure healthy plants.

I have a confession to make.

I did not disinfect my seed trays and other seed starting equipment for the first five years or so of my gardening journey.

Every year, I would reuse the same seed trays, plastic pots, and other seed starting equipment like soil blockers and tools without batting an eyelash.

I would barely rinse off the equipment, let alone disinfect it.

And, I mostly got away with it, too!

That is until last year a few of my very young seedlings mysteriously began to shrivel up and die. It was like they were being zapped by some mysterious force from the bottom up.

I would learn later, this phenomenon is called “dampening off” and is a fairly common consequence of failing to disinfect your trays and other equipment each year before starting seeds.

This post is all about how to sanitize seed trays.

What is Dampening Off?

Dampening off occurs when pathogenic bacteria or fungus attack your young, vulnerable seedling, causing it to wither and die.

This failure to thrive can be mysterious, because the microscopic pathogens are invisible to the naked eye.

Basically, if you are reusing your seed starting equipment season to season (and we love a reduce, reuse, recycle moment!) there are probably microbes and pests lingering waiting for ideal conditions to multiple and wreak havoc.

The only way to hedge your bets against dampening off is to thorough clean and disinfect your seed starting equipment before reusing.

This process kills any pathogens leftover previous plantings before they have a chance to attack.

Another (Creepy) Reason to Sanitize

Beyond microscopic pathogens, there may be other hangers-on lurking that you’ll likely way to get rid of before starting your seeds.

One of my teachers, Jessica Robison, Founder of Acton Food Forest tells a harrowing tale of cleaning one of her seed trays and finding an active spiders nest.

This would have become a problem later when she brought her seed trays into her finished basement (where she does her seed starting) and the eggs hatched, causing a problematic spider infestation.

Disinfect any seed starting equipment you have used in the past.

Reused equipment has had exposure to microbial life that can be dangerous to seedlings.

Note: You probably do not need to new disinfect seed starting equipment that you’ve just purchased.

The process of ridding your seed starting equipment of pathogens and pests consists of two basic steps:

What is the difference, right?

Well, cleaning technically refers to the act of washing off visible dirt and grime. This usually involves soap, water, and some friction.

In fact, the act of cleaning will usually remove a great deal of pathogens. You could probably stop here, but we want to be very conservative when it comes to the risk of dampening off.

Remember, dampening off could ruin a whole tray of seeds (if not more)!

That’s why we also need a disinfecting step.

Disinfecting refers to a chemical process that removes pathogens to an acceptable level, without killing ALL microbes entirely (that would be sanitizing, which despite the title of this article, we’re actually not achieving here.)

Many people use bleach to disinfect their seed trays, but I personally think it’s a bit harsh and can’t stand the smell for too long.

Instead, I use hydrogen peroxide, which has no smell and safely breaks down into hydrogen and oxygen.

Commercially available 3% hydrogen peroxide is effective in removing the bacteria and fungi associated with dampening off.

Rinse off your equipment. I use the outdoor hose for this step.

Let the hydrogen peroxide sit for at least 20 minutes.

This post was all about how to sanitize seed trays. 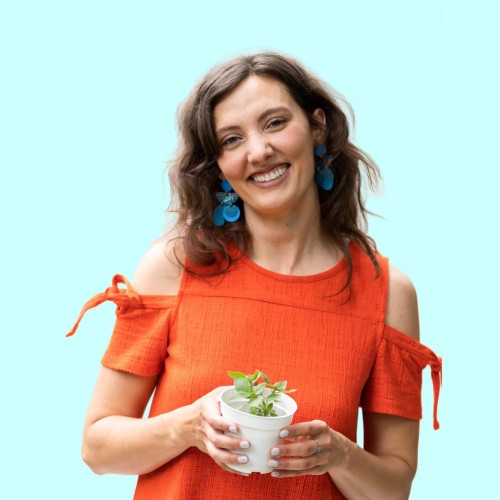 15 Best Gardening Hats for Women & All Genders | Ethically Made

15 Brands to Check Out for Sustainable Crossbody Bags